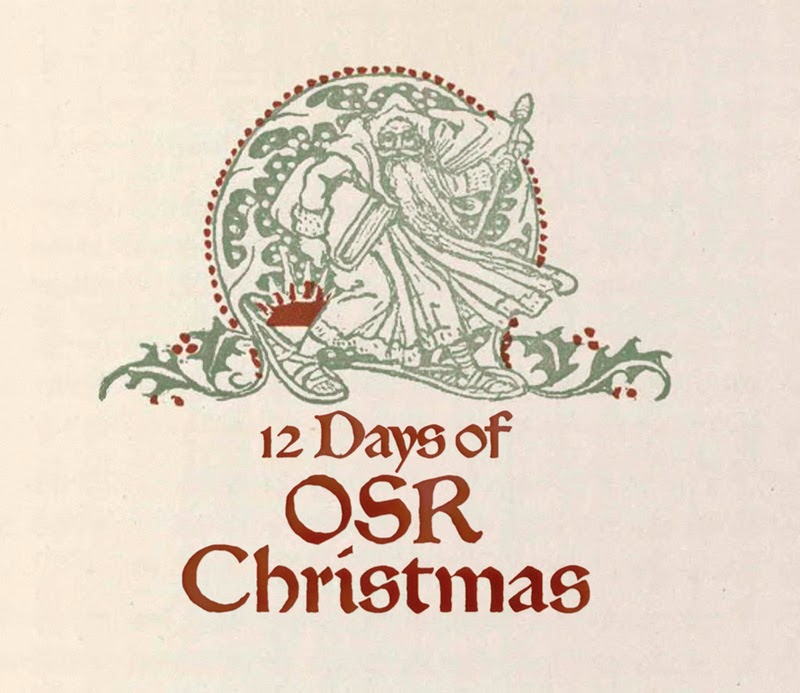 Above donated by Keith N - Mark these as US only

- The novel Heraclix and Pomp in print - ships worldwide - donated by the author, Forrest Aguirre

- a set of 5 miniatures, a human cleric (male) with a tome on a stand and 4 elves (male) in heavy plate and big @$$ swords. US only - donated by Boric Glanduum

and here's the previous listing of Holiday Cheer:

- Rob Kuntz's The Original Bottle City adventure, reprinted by Black Blade this past summer;
- Rob Kuntz's Cairn of the Skeleton King adventure, originally published by Rob's Pied Piper Publishing imprint, now out of print;
- Rob Kuntz's Tower of Blood adventure, originally published by Rob's Pied Piper Publishing imprint, now out of print;
- Rob Kuntz's and Lance Hawvermale's Campaign Treasuries supplement, originally published by Rob's Pied Piper Publishing imprint, now out of print.
The above is being donated by +Jon Hershberger and Black Blade Publishing. Jon will ship the above anywhere in the world on Black Blade's dime, so unless Jon tells me otherwise, this is a bundle of Holiday Cheer ;)
But wait, there's more!
- TWO sets of Dyson's Delves Volume I+II in Print (softcover) +Dyson Logos
- 3 PDF copies of Adventurous Locations I - The Broken Tower donated by +Anthony Hunter
- 1 full set of The Undercroft zine, shipping anywhere in the world donated by +Daniel Sell
- 3 sets of Dungeonmorph Dice (Adventurer, Explorer & Spellunker) as a bundle sent pretty much anywhere in the world. Donated by +Joe Wetzel
- two copies of the elite and very rare "A Collection of Presentations, Cartographical in Nature" donated by +matt jackson
- Print copies of Cryptworld and Timemaster donated by +Tim Snider and Goblinoid Games, as a bundle shipped anywhere in the world
- a complete set of The Manor zine in PDF, donated by by +Tim Shorts
If I've missed anything (and I probably have) let me know at tenkarsDOTtavernATgmailDOTcom. Tuesday is the last day to add to Santa's Bag of Holding ;)
and of course the previously donated loot:
- Peril and Plunder in Print donated by Jeff Carpenter
- Attack of the Frawgs (PDF), Haunting of Larvik Island (PDF), Stronghold of the Wood Giant Shaman (PDF) donated by +Stephen Newton (yes, more DCC RPG goodness)
- 2 PDF copies of the complete Straycouches collection (Crawl! and other goodies) and one Print copy (US Only) of said collection donated by +Dak Ultimak
- Complete PDF Collection of Spes Magna Games releases by +Mark Chance
- A Guide to the Astral Plane (AD&D Planescape) and The Glory of Rome Campaign Sourcebook(AD&D Historical Reference) - Print copies of these TSR Classics again donated by +Mark Chance
- free commissioned piece of artwork (a4, b/w, old school styled) donated by +m foczka , a sample of whose work graces this post above
- First Sentinel Limited & One of the last Whisper & Venom boxed sets donated by Lesser Gnome Games - +Zach Glazar IS The Man. Don't let anyone tell you otherwise.
- Hard copy of Trolls of Mistwood (DCC) by +David Fisher
- A PDF copy of The Caves of Ortok (choose between LL, S&W, or OSRIC)
- A PDF copy of Bearing A Grudge (choose between LL, S&W, or OSRIC)
- A PDF copy of the Noh-Cha Classbook
- A sub to Issues 1-6 of Another Bunch of Content in PDF (the above donated by Infinibadger Press +Jason Paul McCartan )
- Dyson's Delves Volume I + II donated by +Tony T
- An assortment of +Purple Duck Games  DCC Adventures in print (they are in The Tavern's Prize Closet - need to verify what is in there)
- 1 set of print copies of Crawling Under a Broken Moon DCC fanzine (print) +Reid San Filippo
- PDF copy of the Sunken City Omnibus (DCC) +Jon Marr
- a complete set of Crawljammer (DCC) (print) +Tim Callahan
- Complete Vivimancer and the first issue of the new zine Wizardzine (print copies) +Gavin Norman
- Castle of the Mad Archmage books in softcover +Joseph Bloch
- 12 PDFs of Far Realms, 12 PDFs of Far Realms - More Spells and 1 print version of Far Realms(holy crap if I must say so myself ;) +Rick Stump
- print copy of the S&W Player's Companion, signed +James Spahn
- PDF copy of the LL Class Compendium +James Spahn
- some gems from The Tavern's vaults (my wife is making me downsize my collection, even as I upsize it ;)

holy shit but this is amazing!
Posted by Tenkar at 8:27 PM