Last Night My Players Went Down "The Well of the Worm" 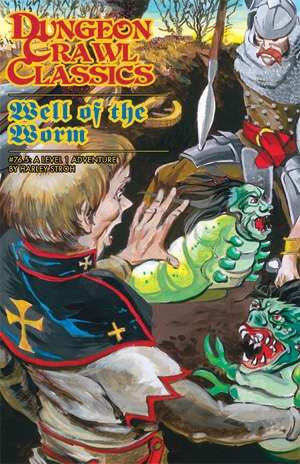 Last night we ran our session with 3 out of our 6 regular players. No fighters, no healers - instead, we had a 2nd level Halfling Thief, a 1st level Human Monk and a 1st level elven Magic-User. My intention had been to give the party a choice of adventure leads, which I had dropped on them at the end of our 1st session, but I went with the adventure I had the best handle on - The Well of the Worms.

I basically ran the 3x version from DCC #29, The Adventure Begins, which holds an amazing number of low level adventures. I also have the DCC RPG version of The Well of the Worms - the map makes more more sense in the DCC RPG version, just so you know.

I tend to convert 3x adventures on the fly for OSR use, although the read through usually lets me know what I have to convert the most. The nice thing about using ascending AC in Swords & Wizardry is that in makes the on the fly conversion so much easier.

The PCs picked up a local farm boy for extra muscle / cannon fodder and proceeded down the well.

Now, I could fill you with spoilers, but +Harley Stroh did a really nice job on this adventure, so I'd rather not. Still, there are some observations to be made:

- 3x had one hell of a HP bloat effect, at least on the monsters. So yeah, had to tone this down a bit, especially four a party of three where the main tanks were a monk and a thief ;)

- My players forgot about the "luck" houserule that I added to this campaign until about midway through - once they remembered it and started to use it, things got a lot more exciting.

- one PC went down to exactly 0 - i go with -10 for death (adjusted by con bonus / penalty) as did the farm boy they hired. It was a tough little adventure, even with me toning it down due to party composition and numbers

All in all, it went very well. This is the second adventure I've run from DCC #29 for the group in this campaign (the other being The Tower of the Black Pearl) and my players remarked on how much fun they were to play. "Weird yet grounded". As one player put it (and I paraphrase): "I didn't like all of the randomness in the spell casting in the DCC RPG sessions we played, but the adventures were some of the best I've ever played". Thankfully, those DCC RPG adventures should convert fairly easily to Swords & Wizardry ;)