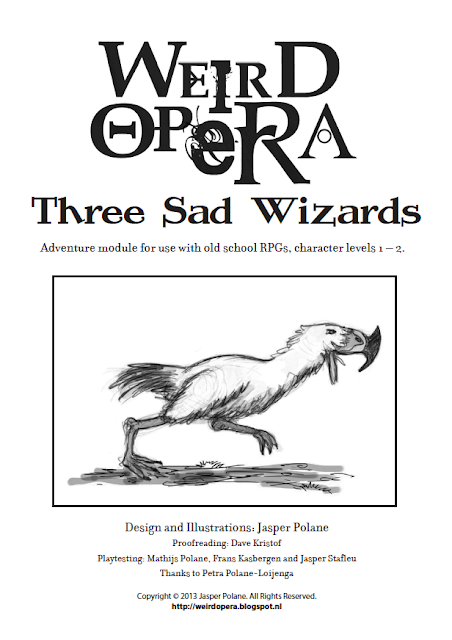 The timing of this adventure is perfect as we just started a new Swords & Wizardry campaign last night. Will I be kicking off the new setting with Three Sad Wizards? Probably not, but there is a awesome amount of goodness for me to use piecemeal later on.

Three Sad Wizards is a mostly lighthearted fare. There are three wizards (obviously) and each has a problem they could use the PCs to solve for them. The whole thing is loosely strung together, and cutting the strings and using the different pieces on their own shouldn't cause any problems.

There are also some small encounters included at the end to flesh things out further if one wants to. For me, they are excellent pieces to place in my new sandbox. Very useful.

As the adventure is situated in the author's home campaign, there are some optional house rules included, as well as new spells and magic items.

It's a very well put together series of encounters, and you certainly can't beat the price.

Free in PDF and also available in print from Lulu.
Posted by Tenkar at 11:58 AM