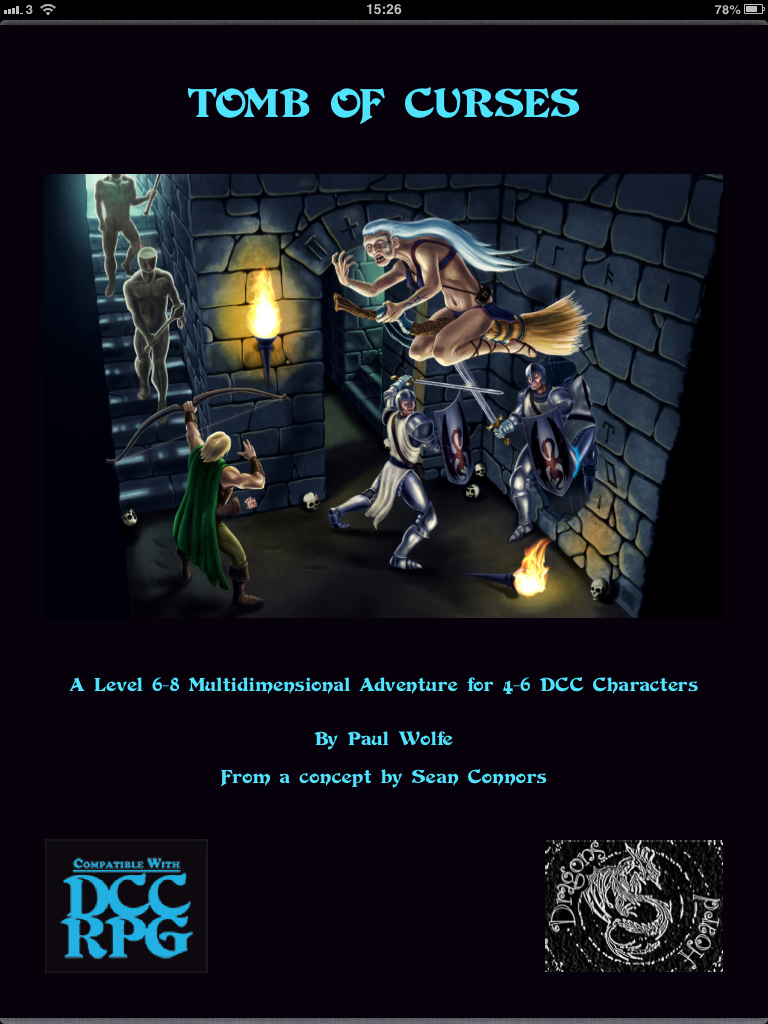 Time to review The Tomb of Curses (for levels 6-8 with 4 to 10 PCs) during DCC RPG week at The Tavern.

Where to start? Maybe with the beginning:


The party finds itself at the end of a particularly difficult adventure, having delved deep into the Brekshire Mines in search of the fabled Everglass of Uth’Pentar...

BTW, you are not quite at the end. You still need to fight the boss creature from the end of the last adventure that your party went on but you never ran because it doesn't exist except for the middle of the final encounter.

I'm sorry, but this is a horrid start for an adventure with ongoing characters no matter how loose some campaigns of DCC are run. Why not give us the previous encounter in whole, or even a (extremely) short adventure? Heck, why is it that except for Purple Sorcerer's additions to DCC adventuring, there really aren't DCC adventures that link to each other. Question for a later post.

That being said, if this were a tournament, convention or one-shot type adventure with pre-gens, starting out at the end of the party's previous adventure is totally acceptable. As far as I can tell, the Tomb of Curses isn't meant as a one-shot (it may lead to a TPK, but that's not an issue in DCC).

So, right from the start you probably need to do some major rewriting of the hook. Which is a shame, as the rest of the adventure isn't bad. I suspect few if any of the PCs will actually make it to the end, but isn't that what the DCC RPG is all about? ;)

One of the reviewers on RPGNow compared Tomb of Curses to the classic Tomb of Horrors, and I can understand why. It isn't just the "save or die" type of traps and the like, it's the "no save, you die" situations that will come up. I don't see 4-6 characters making it very far in this Tomb unless they bring lots of disposable henchmen to be their "mine canaries" to find the "no save, you die" traps instead the the PCs. (cover says 4-6 PCs, referee notes say 6-10)

Run as a one-shot or as a "high-end funnel" of sorts, perhaps to whittle down some prospective replacement PCs in an ongoing campaign to a more manageable number Tomb of Curses could be lots of fun. Hmm, everyone gets 3 6th level PCs and the survivors go to the "replacement PC stable" could work. Yeah, Tomb of Curses really does feel like a high level funnel without the requisite number of PCs to make it work. Making it a funnel also does away with the "starting in the middle of the previous adventure's last encounter" issue.

The art is awesome. I'm a big fan of +Scott Ackerman (who donated this blog's header) and +David Fisher. Well done gents.

With some tweaking of the opening scene, The Tomb of Curses makes for an enjoyable (if extremely lethal) DCC meat grinder. I think I've fallen in deep like of using it as a higher level funnel for replacement PCs. I may need to test the concept down the line.

Is it worth the 3 bucks in PDF? Yes. Even if you only use it for inspiration as to how to best kill of the PCs in your campaign, as there are some imaginative ways ;)

Hell hath no fury like an ex-wife scorned, and Uth'Pentar has eight of them.

For some, even death cannot trump the need for revenge. Prey to a vicious curse, the party must walk a careful path through an other-dimensional tomb to win their freedom. Can they survive the centuries-long, multiverse-spanning vendetta of Uth'Pentar's wives long enough to escape?
Posted by Tenkar at 9:22 PM