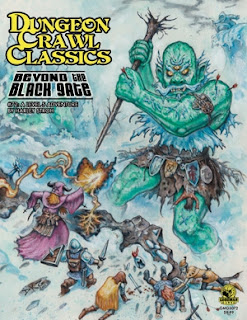 If you've read this blog previously, you'll know how much I really enjoy Goodman Games' DCC line of adventures. The art is always awesome and the maps themselves are works of art. Have Harley Stroh write the adventure and it will probably be love at first sight.

Spoiler Alert! There will be spoilers in the review below! Fair Warning!

Case in point - Beyond the Black Gate. Harley pulls off the start of the adventure in a manner I usually avoid - with a shipwreck. This means, of course, you need to get your part on a boat going somewhere - somewhere they won't actually get to. Harley's writing skill pulls it off, or at least makes the whole situation exciting enough that I'll jump through hoops to get my party there.

There are some very nice roleplaying encounters dispersed throughout the adventure. Each of these encounters have motivations and twists that will be a blast to run as a GM. The players may not appreciate all the twists as they happen, but they'll enjoy the ride none the less. Mendax - even if I never get a chance to run Beyond the Black Gate, this character will be making an appearance - somewhere, somehow.

The story behind the adventure and the ways it may play out are extremely well put together, and the climax isn't the end. PCs may win the day and die in the evening if they aren't careful, but such is the way of the DCC RPG.

Included is a new patron - The Horned King, along with accompanying Patron Taint and Patron spell. You get a lot for what you spend with this adventure.

As for the maps (one of my favorite things about the DCC RPG Adventures) you get three full page adventures. I'm going to throw out a suggestion ere, but with a lot of RPG playing / sessions being run online, a VTT / G+ Hangout Player's version of the maps without the room numbers would be nice. The shame of all the DCC Adventures is that only the GM gets to see them. Player's maps w/o the locations labeled would be an awesome addition to an adventure like this.

Summoned by a coven of foul witches, the adventurers are bid through the Black Gate and across the multiverse, in pursuit of the crown of the fallen Horned King. There, in the icebound gloom of Thrice-Tenth Kingdom, they must pit their wits and brawn against his dread servants. His sullen citadel looms above the darksome woods and elfin ice caves, ruling over the mystic kingdom. Do you dare to ascend the throne of bones and declare yourself master of the Wild Hunt? Whatever your answer, the land beyond the Black Gate is sure to present a grim challenge for the even the hardiest of adventurers!
Posted by Tenkar at 8:52 PM