One of the things that I want to kick myself for is not having a full collection of Christian's past zines.  I should, as I have his first zine, and I at one point had each and every one, but I never realized how much I missed his older stuff until Loviatar came along.  Loviatar hits the same buttons that the best of his past stuff hit for me.  It's just that good.

Now, I'm going to start out I love the Hex 00X series he started in issue #6,  By itself it is worth the price of admission (and as the price is 3 bucks an issue, mailed to you house, how can you go wrong?).   I don't recall what the scale of each hex is, but what he has given us in the last two issues is a growing sandbox to explore.  It should work with any of the OSR games that draw on D&D for inspiration, but could even work with Tunnels and Trolls with very little work.

Thursday Night Fight Club is Christian's first dabbling into Basic Roleplaying.  While I own the latest rules (and even the Fantasy Grounds 2 mod) I haven't played with the system or any of it's close cousins in years.  Still, Christian is always top notch with character descriptions - they are never just a bunch of stats - that knowing the system doesn't matter all that much.  A perfect NPC for any modern RPG system. 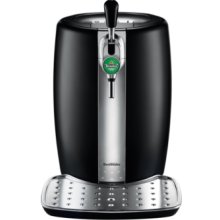 The last article details 2 NPCs for Vampire: The Requiem.  I owned the whole first generation of the World of Darkness Core books and never ran the system.  Could never get my group into it.  Maybe I didn't understand the whole setting behind the closed doors and I couldn't sell it to my friends.  Christian understands it.  Well done as always.

So, simply put, an excellent source for any game master to find inspiration.

Time to pour myself of free tap beer from my Beertender and toast Christian.  Heineken Light lad, but the wife is returning with a mini keg of Newcastle Brown Ale for when this run out ;)
Posted by Tenkar at 7:10 PM