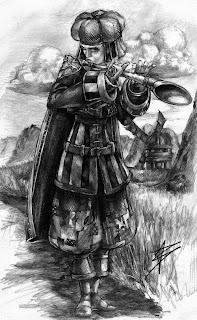 For me, a Bard in a D&D styled game needs access to spells, or else he isn't a Bard.  That being said, LotFP's Weird Fantasy has pretty strict class roles with little if any overlap.  As Bards by many definitions (and most importantly mine) are Jacks-of-All-Trades, how do we rectify that with the Weird Fantasy Rules, let alone the implied setting?

For me, I'm going to link Bardic Spellcasting to the "Pip System" used for Specialists.  Yes, they'll have to roll to cast.  Additionally, the maximum spell level they can attempt to cast will correspond to the "Pips" they have in Bardic Spellcasting.  As their knowledge is imperfect, there will be a chance for some sort of spell fumble, and if they are attempting a spell that causes damage (HP loss), the price for failure, or even in some cases, success, may be high.

Obviously I'll need to work on some mishap charts.

New spells are learned through the gaining of a Pip (one spell learned when a Pip is gained) or while observing another casting a spell.  Spells may be mislearned (which won't be obvious until the first time casting) or impossible to learn (if a roll to learn is failed, it may not be rolled for again.  I think I'd still allow it to be gained from a Pip increase though.)

Figure a point may be spent on Bardic Spellcasting only at every odd level, keeping them from having access to spells before others.

Spellcasting in Weird Fantasy can be a dangerous proposition.  It shouldn't be something Bards (who really aren't properly trained) resort to all the time.  More likely they will cast when other options are gone.

All the above is subject to change ;)