The Draconic Archeologist: Sidetracked By Some Sorcerer's Apprentices 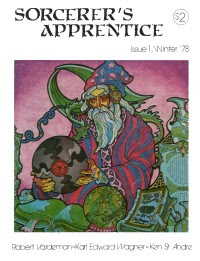 Lookie what the Ebay Gods granted me!  I got my hands on Sorcerer's Apprentice Issues 1, 2, 5 (already had),  9/10 (ditto), 14 ('nother ditto) and 13 (needed that one).  At some point I'll be offering my duplicate issues as prizes for as an as yet undecided contest - no idea when.

Very very cool acquisitions.  Heck, issue #2 even has an article by author Poul Anderson - On Trolls and Others - which looks, you guessed it, pretty cool! ;)

I do love the way mini-solos were integrated into the magazine back then, squirreled away on each pages, so you really did have to flip around for the next part.

I may have to do a side by side comparison of The Dragon #1 and SA #1 at some point.  As covers go, SA #1 has The Dragon #1 beat by a mile and then some.  You probably can't tell from the pic, but the wizard is holding a record labeled: Cythulhu's Greatest Hits.  How awesome is that?

Alright, I need to read these babies - I did notice that Spite Damage made it's debut in issue #13 (you can either thank or curse Roy Cram for that 5.5e and later rule).
Posted by Tenkar at 7:29 PM

Email ThisBlogThis!Share to TwitterShare to FacebookShare to Pinterest
Labels: the draconic archeologist, the trollish taproom, Tunnels and Trolls