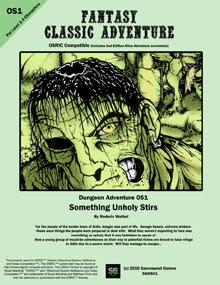 It's always a treat to read another Old School style adventure, and Something Unholy Stirs is no exception. It's written for OSRIC (with conversion stats included for Altus Adventum 2e).  You get a small sandboxie area setting and a dungeon to kill stuff and take their stuff.  Damn hard to go wrong if you ask me ;)

It's for 1st to 3rd level characters, which may be an issue for some, as it seems there is a large portion of Old School adventures that already fall into that range.  From my personal point of view, you can never have enough low end adventures.


For the people of the border town of Aldin, danger was part of life. Savage beasts, extreme    winters--these were things the people were prepared to deal with. What they weren't expecting to face was something so unholy that it was forbidden to speak of.

Now a young group of would-be adventurers on their way to potential riches are forced to take refuge in Aldin due to a severe storm. Will they manage to escape...