Tunnels and Trolls - I Think it Bit Me

Alright, so i highlighted Trollzine 3 a few days back.  Started reading it.  Looked over the solo adventures in the magazine, thought fondly of the days of my Coleco Adam POS... alright, not so fondly of the Coleco Adam.  But back in those days, if I wanted to do some killing of beasties and taking their stuff, and I didn’t have my gaming group with me, I always had Tunnels and Trolls. 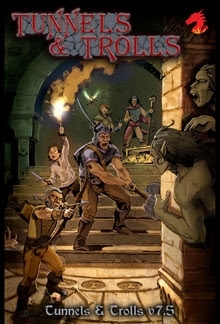 Dave (winner via last man standing of the Swords & Wizardry Whitebox Collector’s Edition a few weeks back) had a huge collection on Tunnels & Trolls solo adventures when I was in High School, and was always nice enough to loan them out to me.  God, those books were killers.  Literally, they killed far more of my characters then actually survived.  Some days it was like having a save point in a computer game, i’d pick up from a major junction prior to my characters death, just so I wouldn’t have to start again from the beginning.

I even kept with them in my early Commodore 64 days, but eventually, computers tore me away from solo gaming via T&T.  Until this weekend.  I downloaded the free, shortened rules for T&T, but couldn’t find the 7.5 edition in PDF.  I’ve gotten hooked on instant gratification with my gaming desires with the purchase of my iPad, and this was frustrating the crap outa me.  Until I noticed Fiery Dragon published the Tunnels & Trolls 7.5 edition rules. Snatched that sucker right up, uploaded to my Dropbox account and moved from there to my iPad.   I’m gonna be on a Tunnels & Trolls kick for the next few days I think.

Tunnels & Trolls solos are about as dangerous as anything James Raggi publishes.  I expect a high body count before I’m done ;)