Today is my birthday.  I have hit the grand old age of 43, an age I never would have imagined people actively roleplayed at when I was 13.  Go figure.

More importantly tomorrow is the seasonal (more or less) Gathering of Fools.  The core of my old High School / College / Life Before our own Families and Responsibilities Group gets together every few months to shoot the shit, have a few beers for old fiends we've lost, watch Army of Darkness for the 27th time, eat lots of beef jerky and basically act like we did 25 years ago.

I like to bear gifts when possible during these gatherings.  Castles & Crusades books, OSRIC, Labyrinth Lord, Swords & Wizardry... I've given them all out.


Tomorrow I get to give out copies of Dark Dungeons, some Swords and Wizardry Quickstarts and a single copy of the Swords & Wizardry Whitebox Edition in the collectible box.  Think I'll run a mock combat with the S&W rules, last man standing gets the boxed set.  Should be a blast. 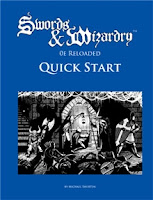 Posting may be light the rest of the weekend.  Or not.  One never knows what may spark a post ;)
Posted by Tenkar at 3:53 PM