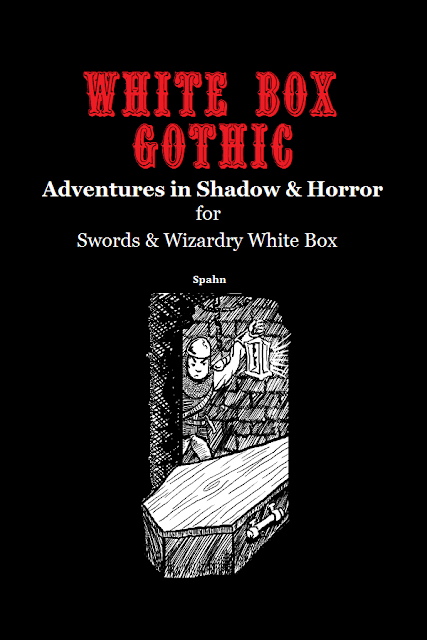 Barrel Rider Games / +James Spahn has a new release for Swords & Wizardry White Box - White Box Gothic. I'm chomping at the bit to read it, but I figured I'd share the fact that it has released first.

I'm excited because I always like a little horror in my fantasy roleplaying. Not the over the top, often campy horror the the Ravenloft setting often coughed up, but something a bit more - I don't know, not realistic, thats for sure, but certainly something more.

I trust James to have delivered that "something more"

- Six New Classes: From the deadly Monster Hunter to the damned Dhampir.
- Thirty New Spells: Speak with the dead, defile the land, and bind spirits to your service!
- Twenty-Five New Magic Items: Draw undead servants from your Bag of Bones, learn the secrets of the Book of the Damned, and draw hope from the Symbol of Piety!
- Fifteen New Monsters: The lowly Cultist, the mysterious Breath Stealer, to the powerful Vampire Lord!
- Optional Rules: Corruption, Dread, and laying Curses!

Inside these fifty pages you'll find all manner of dark and dire secrets to vex your players and defy the undead!

Disclaimer - I know James. Not only is he a good friend, but he is a coconspirator with myself on future Swords & Wizardry Light releases. We wouldn't be coconspirating if James weren't damn good!

Remember, all purchases using The Tavern's OBS affiliate links puts 5% of your purchase price into The Tavern's coffers. Don't leave that money on the table for the greedy corps! Tip your barman!  ;)
Posted by Tenkar at 9:38 AM

Email ThisBlogThis!Share to TwitterShare to FacebookShare to Pinterest
Labels: Swords and Wizardry Whitebox