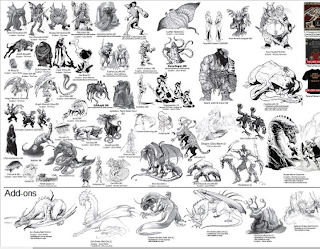 I remember the Tome of Horrors Miniatures Kickstarter - the idea of getting a Flumph tempted me, that was all, but I never expected the entertainment value that this imploding Kickstarter would give the gaming public.

But look, here's the savior! Mortal Arrow will save the project! So long as Frog God Games gives Mortal Arrow the licensing fees they were paid by Centerstage Miniatures to use FGGs IP (trademarked names and the use of FGG's artwork to base the mini's off off.) Mortal Arrow will then change names of any minis that are trademarked by FGG and remove any reference to Tome of Horrors and FGG if and when the minis are released. But yeah, still using FGG's art as the basis for the minis.

Did I mention the backers of the Kickstarter would be expect to pay for their minis - at a reduced price, of course.

Or that if Frog God Games didn't agree to all of this, they were threatened with the possibility of "a PR Black Eye" and even a lawsuit? When I negotiate with a third party, veiled threats are always my preference

I'm just quoting my comments to the Center Stage Miniatures Tome of Horrors Kickstarter, so people from ToH2 can see it, and so it's linkable. The comment I refer to, from Mortal Arrow, is: "I'm glad to see that Matt Finch has commented. Maybe he should describe his role at Frog God. And more importantly, he should let us know if Frog God has received funds that were raised through this KickStarter. And if so, how much?"

In response to Mortal Arrow's question, I'm part owner of FGG. I'm going to post the operative terms of out contract with Solarz, and also the full text of a letter we got from Mortal Arrow. However, first I want to reproduce the exact paragraph where we all decided there was no way we would ever do business with Mortal Arrow (other than that he has less track reccord in the business than Matt Solarz):

"Third, I originally asked Bill if he was willing to return some or all the licensing fee already received from the ToH1 project. I believe there is still a potential that this will give Frog God a PR “black eye” and open them up to be drawn into a lawsuit, should it occur. This would be the cleanest way to wash your hands of these projects. These funds would also be applied to fulfilling miniatures and be the best way for Frog God to exit with the maximum amount of goodwill."

Mike is now trying to do exactly what he threatened in his letter, to create the "PR black eye." He's proving out exactly our concerns about his character.

In terms of our deal with Matt Solarz, we got paid our licensing fee on the first Kickstarter, which was 15% of gross receipts. Without checking with Bill for the exact amount that must have been about $14K since I think it was net of the Kickstarter fees. We got stiffed on the second Kickstarter like everyone else, although Matt Solarz did call us, and we did agree that if the project depended on it we would wait. Let me see if I can paste the whole of Mortal Arrow's letter (the "Matt" it's addressed to is me, not Matt Solarz):

Sorry for the confusion, though Skeeter Green’s comment seem to have announced something similar.

As stated below, for me to sign off on any agreement I require that Frog God confirms that Mortal Arrow LLC can ship miniatures to Backers of these projects without interference from Frog God games. This is first and foremost, as it is a deal killer for my talks with Matt and CSM.

Second, Bill mentioned forgiving the $2K+ owed to Frog God by CSM on the ToH2 project. I’d like to know if this offer still stands. These funds would be applied to fulfilling miniatures, and I would promote the generosity of Frog God to the Backers.

Third, I originally asked Bill if he was willing to return some or all the licensing fee already received from the ToH1 project. I believe there is still a potential that this will give Frog God a PR “black eye” and open them up to be drawn into a lawsuit, should it occur. This would be the cleanest way to wash your hands of these projects. These funds would also be applied to fulfilling miniatures and be the best way for Frog God to exit with the maximum amount of goodwill.

If all three are done, then the plan is to remove all reference to the Tome of Horrors and rename any of the miniatures under its copyright domain (e.g. Tsathar and Inphidian). This will clearly separate Frog God’s business from this debacle.

If there is intent for the Mortal Arrow LLC (the company I’ve created to take on these miniature lines) and Frog God to collaborate in the future, then we can negotiate this separately, once the dust has settled.

Please let me know your thoughts on this proposal. I’d be happy to discuss this an alternate thoughts.

Mortal Arrow seems to think that (a) people believed we weren't charging a license fee and that (b) we'd be ashamed of charging a license fee. Of course we charged a fee, we got paid on the first one, and we didn't get paid on the second. We don't pay hush money on things we're not ashamed of or trying to hide, and we don't do business with people who try to fund their startups with this sort of behavior. We're perfectly willing to license a reputable company with experience. We will not under any circumstances work with Mortal Arrow.

Here is the contract (this is from my MSWord file, but I think it's the signed version):
CENTERSTAGE MINIATURES AND TOME OF HORRORS
Intellectual Property License Agreement
This agreement (the “Agreement”) is made and entered into as of April 30, 2013 between Frog God Games (“FGG”), with offices at 5045 Minder Rd., Poulsbo, WA 98370 and Matthew Solarz (“CSM”), with offices at xxxxxxxxxxxxxxxxxxxxxxxxxx.
NOW THEREFORE, for and in consideration of the covenants, agreements and representations set forth below, and for other good and valuable consideration, the parties hereto agree as follows:
1. Design License: FGG hereby licenses certain intellectual property to CSM for a period of 1 (one) year. The intellectual property licensed hereunder (the “Design Licensed Material”) comprises the right to design miniature figures based upon but not identical to the visual representations and text descriptions of characters and monsters in the Frog God Games publication Tome of Horrors Complete. This period may be extended by mutual agreement of the parties.

3. Payment for Design License: CSM shall pay FGG a license fee of 15% of gross sales of miniatures that are subject to the Trademark License, for the duration of the Trademark License as it may be extended. The fee shall be accounted quarterly, and paid within 45 days of the end of the accounting quarter.

4. FGG Option to Examine: Upon written request, FGG shall have the right to examine or cause to be examined through certified public accountants the books of account of CSM insofar as such books of account shall relate to the receipt of funds by CSM from the sale of miniatures that are subject to this Agreement. If such examination shall reveal errors of accounting (other than those arising from an interpretation of this agreement) amounting to a sum in excess of $250 to FGG's disadvantage, the costs of such examination shall be borne by CSM.

5. Governing Law: This Agreement, including all matters relating to the validity, construction, performance, and enforcement thereof, shall be governed by the laws of the State of Washington.

Okay, the last bit of the contract did get chopped off, but it's the boilerplate. I won't fill up peoples' screens with it.

Suffice to say, you can see from Mortal Arrow's letter why we won't work with him, and you can see from the contract that we don't even have the audit right to see what happened to the money. We can only trace receipts.

Our only role was letting Matt Solarz use the monsters and pay us a percentage of the sales, and we don't have any leverage other than that. Our only ability here is that we don't have to allow assignment of this contract. We have some ability to make sure that if our name is going to be used on an attempt to fix this disaster, that the white knight is actually a white knight. We determined that Mortal Arrow would likely, based on correspondence and lack of track record, not be a good fit. Matt Solarz apparently made the same determination, or something like it, independently. Mortal Arrow has, in his earlier response on this thread, absolutely confirmed our suspicions about what he meant in his "you'll get a PR black eye" paragraph.

Talk about a clusterfuck.