The Old Gaming Group May Have Been Tempted Back Into the Fold... 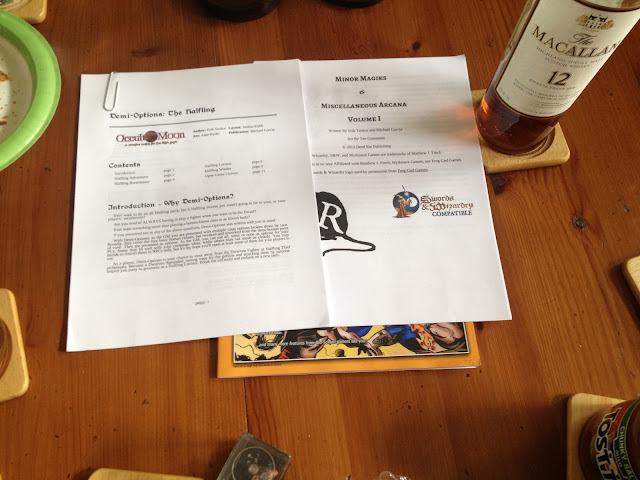 This year's host for the Gathering of Fools was Tony, and he nearly floored me when he showed me that he had printed out two of my PDFs for Swords & Wizardry: Demi-Options: The Halfling and Minor Majiks & Miscellaneous Arcana Vol 1 as well as KnockSpell #6. We haven't had a session of tabletop roleplaying as a group since March of '97 yet the desire is still there.

We did come close today, as we ran the first two quests from Drinking Quest 1. Regretfully, we saved DQ to the end of the gathering, where we had all (except our designated driver Bri) had too much to drink. It was soda and water for everyone but the one player who NEVER lost an encounter (Dave). Actually, there was some cask strength scotch making the rounds, but only two dared to drink it - Dave and John. I wisely stuck to beer ;) Still, we got to use the results of the DQ session to decide the order of picking the RPG items I was giving out.

There is talk of getting together once a month via G+ Hangouts / Roll20, which would be a crap load of fun. Additionally, there is talk of me running a one-shot epic level session with pregens for a six or seven hour sitting. That should be interesting.

Did I mention I'm exhausted? heh
Posted by Tenkar at 9:33 PM