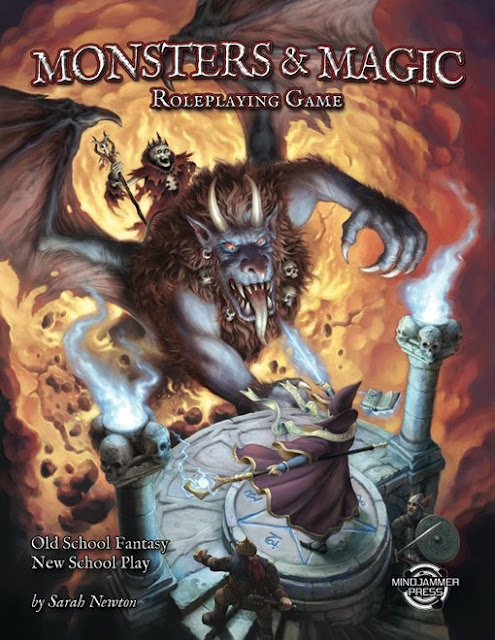 Alright, I know there really isn't any OSR "New Wave" category or label. Maybe I should have used "OSR / Fate hybrid". Monsters & Magic feels very familiar to the OSR that I know until it doesn't. Maybe I need to explain that a bit.

The intent of the author when writing M&M was to combine the classic feel, gameplay and most importantly (at least from my POV) compatibility to the OSR / Classic / pre 3e adventures and sourcebooks while also including more modern gaming concepts from the "narrative" side of the gaming fence.

I guess Dungeon World does this to some sense, but it really isn't "plug and play" with OSR and classic D&D adventures.

Anyway, back to M&M. It's built on the same classic ability score you know and love. You can even roll 3d6 in order if that's the way you make your players roll.  Score range from 3-18.

M&M includes all of the classic AD&D classes (including all of the usual sub-classes), the usual races (even Gnomes and Half-orcs) and the races have the abilities you expect, even if they are redefined as traits. Heck, it even includes racial restrictions to classes (although if every other race can have clerics, I dont see why halflings can't)

Weapon damage pretty much uses the dice you'd expect. It all feels very familiar, until you realize the system has done away with the d20.

I'll let that sink in for a few seconds, as it's near sacrilege amongst much of the old school.

Instead, M&M uses 3d6 with modifiers added to the total for task resolution / checks / combat / etc. Which actually makes prefect sense, as the bell curve makes a really high roll (or low one) less likely and makes modifiers more important. Look at that. I'm okay with losing the d20 ;)

Did I mention you have two types of hit points, physical and mental? You even get different sized hit dice to roll.

Interestingly enough, most monsters from classic sources are easy enough to convert to M&M. The more comfortable you are with the idea that "close enough" is good enough, the easier the conversion process. That goes with converting characters and NPCs over too. The play is different but the "data" need to run things is pretty much the same, its just the interpretation that differs.

Time to break for the moment. In part II I'll start by talking about "Advancements", which are sorta like powers, feats, skills - and then some. They are integral in personalizing your PC. Oh, and I'll "scales of play", which includes domain level play and more. And of course the more "narrative" aspects of play such as effect points.

Monsters & Magic is a very similar and very different take on the D&D I know.

(Hey, I have a free PDF copy of Monsters & Magic to give away! - expect a post later tonight on the give-away)