Hammerax: The Ancient World is a RPG setting that is powered by QUERP.  You don't need to pick up Querp to run it, as everything you need is self contained.  So in a sense, it is both a setting and an RPG.

This is a world where pretty much every fantasy race you can think of has been killed off.  No halflings, dwarves or elves - but their ruins remain, as do their artifacts.  It's an interesting twist on a humo-centric setting while still keeping (distant) roots to the usual fantasy tropes.

The new classes added to the QUERP lineup are decent, and certainly fit the setting.  I would suggest using the core classes from Querp (if you have it) for the majority of the NPC, as I suspect not every skilled character will be as specialized as the classes in Hammerax.

I do have issues, one minor, the other less so.

The other issue isn't so minor.  For me, it's damn annoying.  I've bitched about this before, but presentation goes a long way, and artsy for the sake of artsy is not a selling point, and it pleases no one but the person who is being artsy. 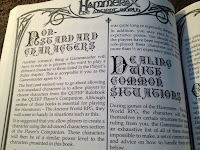 What am I talking about this time?  Not the style of writing, which is fine.  It's how some of that writing is presented.  The damn Title Font that was used should be taken out and shot.  I shouldn't have to decipher each section title as I come to it simply because someone thought it would look cool.  It might look cool, but it's damn near impossible to read and its everywhere in this book, often multiple times per page.  Enough.  Please.  Reading should not be turned into a chore.  (edit: I'm going from the dead tree version - I see based on a review over at RPGNow that the issue has been corrected in the PDF version.  So, I'm going to suggest you pass on the dead tree version and stick with PDF in this case, even for you print -grognards out there)

So, overall Hammerax is a nice self contained setting for someone that wants to give QUERP a look, as everything you need to run a campaign is here - system, setting, a solo adventure and a group adventure.