Are Your PCs Disposable Heroes? 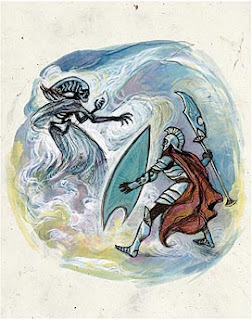 I'm an OSR type of guy, and I had a conversation with a 4E playing friend on Google+ earlier today.  When i told him (in reference to a statement from "Greg" who was asking the 5e designers questions about 5e) that I couldn't comprehend planning a character 20 levels in advance, he told me that is because in 3e and 4e, player characters are no longer "disposable" like in the earlier editions of D&D.

Were your PCs all that disposable in earlier editions?  Mine weren't.  I was attached to them, and even have a collection of my original "Goldenrod" character sheets.  My first character (AD&D) died before he hit level 6 (poor Cyrus the Fighter), but Striker the Paladin hit 17 (complete with a Monte Hall collection of goodies) with just one death in his early teens - thank the gods for Resurrection spells, as all they recovered were a few of his bones after the battle.

The thing is, in my classic time of playing, especially in my college years, few campaigns made it to name level, let alone beyond.  It wasn't from lack of time to play, it was due in large part to the awesome number of choices to play.  TSR releasing settings faster then 2e splatbooks meant lots of starts, stops, reboots and the such.

Still, death was always there for the PCs.  Each campaign suffered PC death, but by the time the players hit 6th or 7th level they were usually well enough equipped that death was rare, and usually climatic if it happened (and party resources often meant a Raise Dead or such would right the wrong assuming there was no TPK).  Reaching name level was a huge accomplishment, both for time invested and in player skill.

No player in any game I played in, even in the Monte Hall games of my youth, ever reached level 20, let alone thought about their power and abilities at that point in your character's career.  Which, I guess is where we have our failure to see.

In the OSR, you start at first level and struggle to gain expo, gold, fame, levels, magic, etc and each level is a highpoint.

In the later editions, you know what you plan to be when you reach level 20, and spend your character's career walking the predestined path to get there.  In some ways, you're starting at level 20 and looking back the whole time, or at least that's how I see it.

In the OSR, your character is always looking forward.

Strange that the new looks back, and the old looks forward.
Posted by Tenkar at 9:22 PM