On the 12th Day of Free Holiday Swag, My Bartender Gave to Meeeeee: The Pathfinder Bonus Bestiary 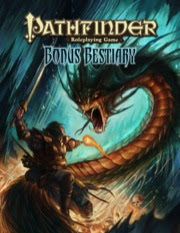 Hey, I think you could actually sing the title of this blog post.  Not saying you should, just saying you could.

Brenden was nice enough to point out the Pathfinder Bonus Bestiary.  It's a short (yet well produced - it is Paizo after all) monster manual for Pathfinder.  It is easy enough to convert to the OSR game of your choice, as it's always easier to cut out the chaff then to add back in.

13 creatures, some of whom I recall from the old Fiend Folio in 20 art filled pages.  Good stuff for the right price.

Unleash the Beasts!
Get your first look at the future with more than a dozen menacing monsters that we couldn't make room for in the Pathfinder Bestiary. These creatures won't be making an appearance in the Pathfinder RPG for at least a year and will thus only be available in this book for a long while. Showcasing the new rules and flexibility of the Pathfinder Roleplaying Game, this collection of creatures draws from more than 30 years of gaming history and includes:
Posted by Tenkar at 2:00 PM