Alright, I figure it's time to address "the elephant in the room." I've heard differing theories as to why I seem to "have a hard-on" for Justin LaNasa, ranging from jealousy over his success, to his abrasive and insulting personality, to disagreements over social and political viewpoints and beyond.

Here's a simple fact: I don't respond well to threats of legal action for asking questions and investigating events that are newsworthy in the gaming community. My first threat of legal action was from Gail Gygax, when I started digging into the fiasco known as the Gygax Memorial Fund. The threat was certainly backed by a willingness to follow through if she had indeed thought she had a case, as she had already spent over six figures litigating the Gygax TM dispute with TSR 2.0. I didn't back off and no such action was ever filed. Instead, it was a simple attempt to intimidate me.

This is why the VAST majority of threats of legal action are made. The one with potentially deeper pockets threatens the one with perceived smaller pockets for making public questions or inferences or opinions with the hopes of shutting down such actions.

These individuals also prefer to insinuate such actions, using phrases such as "you may be liable in court for your words" or "such actions may be costly in a court of law", although some have come right out and threatened to "sue your ass and take your house!" In Justin's case, it was: "Another thing their armchair lawyer you might want to be very careful you might get pulled into this very easily you know what character deformation, slander and even in some case fraud is? I suggest you stop picking sides and steering things could get costly to you to!!"

Although I take such threats seriously, especially as they have the potential to put myself and my family in financial difficulties, or worse, I do happen to understand the laws regarding slander, libel, and the like. As Frank Mentzer once told me, and I am paraphrasing: "My wife and I follow your Ken Whitman coverage closely, and she is often fearful that you'll get sued. I told her 'Tenkar knows where the line is and will gladly walk right up to it, but never cross it. I am never concerned for you'".

If you want me to draw a laser focus on you and your activities, if you want me to be the dog that bites down on your leg and won't let go, threaten me with legal action. Especially a threat that does not spell out my actual violations of the law. General, baseless threats are the most surefire way to get my unwavering attention. I've been threatened with legal action over a half dozen times and I'm still here and I've never backed down.

Justin apparently has a habit of throwing around baseless legal threats, like the ones he's been threatening the various Facebook Groups that have TSR in their name. What makes the group I highlight below extra interesting (aside from the fact they told Justin to effectively pound sand), is that Justin is claiming copyright for logos that are using the original classic era TSR logos that are still copyright by WotC. Justin had all of the logos redrawn and the new ones differ slightly from the originals. Apparently, either Justin can't tell the difference himself OR he's making yet another baseless legal claim in the hopes of gaining compliance via intimidation.

So now you know. 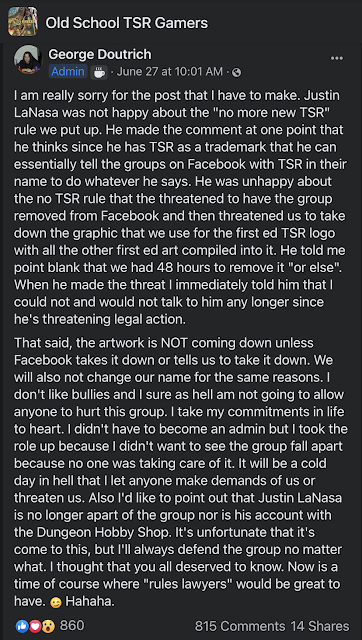 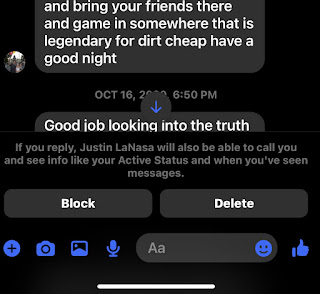 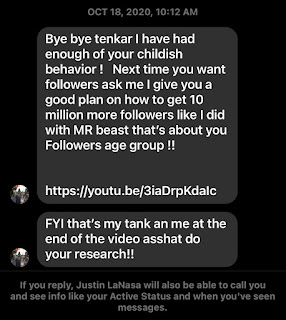 Email ThisBlogThis!Share to TwitterShare to FacebookShare to Pinterest
Labels: lanasa, state of the tavern keeper