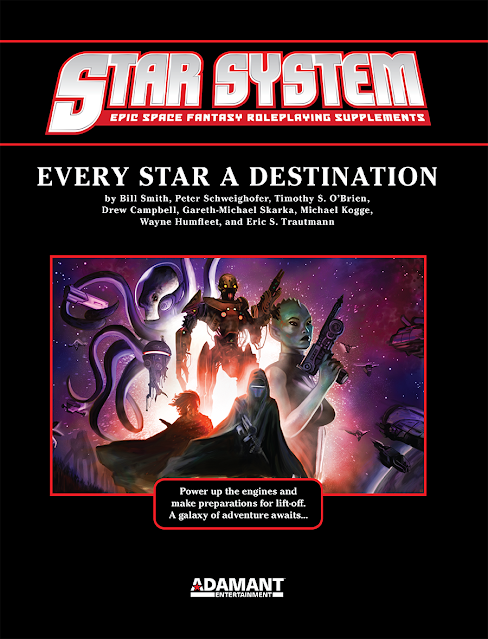 BACK INTO THE BLACK...

The writers and editors behind some of your favorite releases for the greatest space-fantasy RPG of all time return to the D6 System!

...together again to bring you an anthology of eight brand-new D6 System-compatible space-fantasy adventures.  Each scenario is ready to be dropped into any existing campaign, or used to launch a new one!

Visit scenic Tekazzil, home to a royal society that views laws as optional and profit as king; slog through alien jungles in search of an ancient artifact... and the lunatic who hopes to find it first; battle octopoid pirates above the gas giant Arx; try to survive an ancient ghost ship trapped in a ruined sector of space; witness the fearsome might and utter horror of a planet of bureaucrats; avoid being caught in the fatal crossfire between vicious university academics; battle for survival against a brutal race, long believed to be extinct; and join a rag-tag fleet of xenoecologists as they attempt to preserve a pod of galactic leviathans...

The galaxy is vast and unforgiving... especially on the edges of known space.  Out there, a willingness to risk it all can be the key to survival. Every flight means danger, every landing field, starport, or orbital base can be the line between life and death.

EVERY STAR A DESTINATION

PDF and Print Edition are the same price -- and if you order the Print Edition, you get the PDF for FREE! Included with the PDF are a set of bonus files with all of the handouts, references and templates, ready to print.

This adventure anthology is the first of Adamant Entertainment's new line, STAR SYSTEM, a series of epic space-fantasy releases intended for use with any game using the classic D6 System. Follow Adamant on Twitter (@adamantent) to stay informed about new releases! (but not Far West. Never Far West)