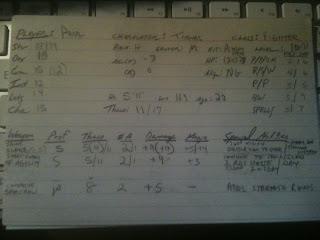 Yep, before we had computers, laptops, iPads and the rest of the computer age helping us run our games, index cards were the shit!

I wish I remember where I got the idea from.  If I had to guess, some issue of Dragon magazine, but I read all the gaming mags back then, so it could have been from nearly anywhere.

I used the 4x6 cards, as the 3x5 were just a tad to small to be useful.  I would write in the basic captions and the players would fill in the details.  I would then refer to these cards during the game, so I would know the stats, saves, weapons, items, etc of the players without needed to ask them.  The back of the card lists items and the thieving abilities.

I was a generous and benevolent DM during the campaign in question.  At the time we had 3, maybe 4 players, and not one was a healer if I recall correctly.  I'm going to say this was a AD&D 2e campaign, as I'm pretty sure those were the rules we were running with mostly.  None of us knew the politics behind EGG leaving TSR, and there was no internet to float the stories and rumors in.

So yes, the stats were inflated, and Paul dual-classed, which probably wasn't too hard to level, as we gamed every Sunday and during the summers we even snuck some extra sessions in.  Still, we had a blast, and at least these characters weren't using my "% increase" house rule that I ripped from UA's Cavalier class.  I quickly learned that was a path to madness.

Paul is the friend that we had dinner this past Sunday in memory of.  I actually found his index card (and Dave's and Brian's - they were at the dinner too) Sunday afternoon as I was moving and boxing even more gaming stuff.  Good looking out lad.  You brought back some fond memories on a day that had the potential to be truly depressing :)

Email ThisBlogThis!Share to TwitterShare to FacebookShare to Pinterest
Labels: AD and D, memories