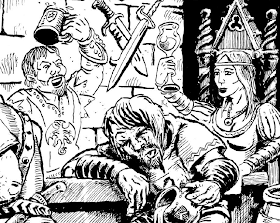 I mean it when I say the DCC RPG Community is damn awesome and the the most generous gaming community I've been a part of.

Why do I say that?

In no particular order:

I've had 2 readers of this blog send me their extra copies of a DCC adventure in print to use as prizes in DCC RPG contests. Yes, they spent their own money mailing me their extras so it could go to a worth entrant. Huzzah!

I've had amazing dealings with the 3rd party publishers of DCC Material. Dak gives away an issue of Crawl! with each contest. Purple Sorcerer, Purple Duck and Thick Skull Adventures have all donated PDF copies of their releases to the monthly contests (and starting next month, Purple Duck and Thick Skull will be donating PRINT copies!). There are other third party publishers that plan on adding to the mix when their products are released (and I'll mention them then). Giving away free stuff to the gaming community makes all of them aces in my book!

Occult Moon Games has been generous in donating copies of Toys For the Sandbox and other goodies, and Tim from Gothridge Manor donated a copy of The Manor for the September contest. Writers and publishers that aren't directly involved with the DCC RPG game still feel a part of the community, and they are.

We had 133 entries in the Zero Level Occupation Contest (I still need to make a proper list of the entries), 25 in the Design a Corruption Contest (amazingly well designed entries) and 52 for the Mercurial Magic Contest. This is you, the readers. Running these contests is fun for me because it's obviously fun for you. I thank you all.

I probably should spend more time on the Goodman Games forums, but I seem to find my DCC Community on the blog and Google+.

The current contest entries have had their names scrubbed from them and have been forwarded to the trio of judges. Winners should be announced sometimes this weekend.

Now I need to think of this month's contest...